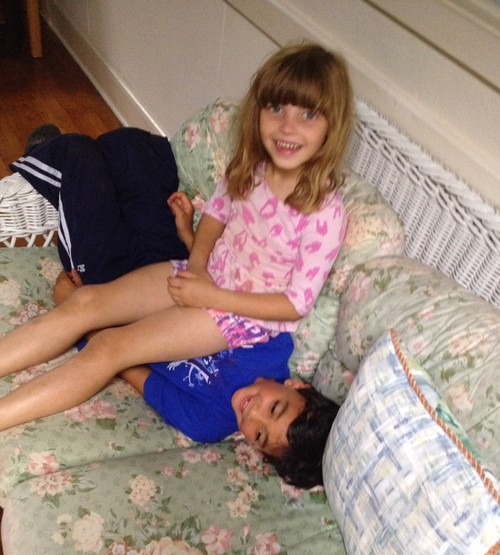 My Sistas,
“Mrs. Sandie! Emily is telling me what to do! She’s not the boss of me!” Well Luca, you’re right. Emily is not your boss. But listen to me…I am telling you to stop throwing sticks and rocks into my creek! “Mommie! Luca is not making me happy! I would like him better if he would just make me happy!” Oh Emily! It’s not Luca’s job to make you happy. But listen to me…if you want to have a friend, then be a friend. Genesis, The Curse, played out right here in the Pfafftown. Adam, master of the garden, struggling to take control of his environment, but those dang weeds and thorns are ruling his fields. And Eve, mother of all relationships, struggling through labor to birth the perfect playmate, but dang it, he has opinions she doesn’t like. But just try to separate Emily and Luca for half a day. They’re crazy (about each other). This is a real-time Emily and Luca story. I am laughing at them as I swing in the hammock. They are bug hunting right now. “LUCA ARE YOU LISTENING TO ME? Mommie he doesn’t even listen to me! I SAID LUCA ARE YOU LISTENING TO ME?!” And Luca is humming with his fingers in his ears. Honestly!
I see both Adam and Eve in both Paul and me. I think we all are Adam and Eve in some way, and we struggle with that ambivalence of how to balance both sides. Case in point, Paul said this morning before church that he knows he needs to buy 3 pairs of shoes before the beach. The Eve in Paul wants the perfect casual pair, a brown sandal, and a black sandal. But the Adam doesn’t want to go shoe shopping.
It’s been a hard Fourth of July weekend. Independence from what, exactly? Terrorists? I’ve had terrorists in my life. When my world exploded 5 years ago, I thought I would never dig my way out of the rubble thanks to some well placed bombs courtesy of my own terrorists. I’m not making light of what our country has been through. This is just my own private analogy. I’ve seen years of redemption. My little family has been through so very much, honestly too much, and it doesn’t take a big bomb to remind me of our wounds. Thursday morning while at work, I had an in-my-face reminder of some of what has been so very painful to my family. And I cried at work for several reasons, and I hate to cry at work, even though it’s safe. But that one reminder set off a chain reaction of explosions Thursday night at home. Blaming and finger pointing. It’s more you than me. At least I never did this. How could you do that? Well what about what you did? And somewhere in there were the words “I could so easily hate you, Paul!” Which has to be followed by the obligatory “well I could hate you too, Sandie!” We are not that family. We don’t fight. Yeh the girls fuss at each other, and Paul and I raise our voices. But we are not THAT family. (Emily and Luca, however, are that family!) Our nearest neighbors are way more likely to hear blood-curdling screams from a tickle fight than to ever hear me yell hatred. Maybe we should fight more. Maybe we should just be honest more. This is as honest as I can get. And it feels really scary to be that honest about what is so very ugly. I’m not always good at being honest. I’m a terrible liar, and I don’t really do anything worth lying about. But I’m not good at being honest about what I feel and think. Believe me, if there’s something deep inside me I don’t want you to know, you won’t know it. And that’s not a virtue.
So Fourth of July came Friday after a sleepless night. And Paul and I tip toed around each other like we were afraid of acting normal. What the hell is normal anyway? Not being honest is normal and that’s what started this whole mess. UUGGHH!
I know the terrorists have been counting on Paul and me to self-destruct. And if we are all being honest, my Sistas, some of you probably are also. Even if you didn’t wish it on us 5 years ago, weren’t you thinking it? No judgment. Honestly I thought it, too. But God…
Heaven bent down then as always to step in and regrow what only redemption can regrow. And it’s not as easy as that sounds. It’s more costly than anything. And honestly, the process sucks.
A friend blogged recently that he has spent too much of himself worrying about what often isn’t as bad as what he worried it would be. That’s my Lauren all over the place! And me too, sometimes. But I responded that I also have had times when the reality really was much worse than I feared it would be. And had I known it was ever going to be that bad, I would have chickened out of following God through it. Honestly I wouldn’t have taken the first step in obedience if I had known.
So Emily and Luca have gone to their neutral corners for now. Luca is home, and Emily is in her natural habitat–the creek. He leaves tonight for his family beach week, and by tomorrow afternoon, Emily will be staring out the back door looking for him to return. She will miss him dearly, and everyday I will hear “how many more sleeps ’til Luca comes home?” And he will come home, and they will fight for a week. Then we go to the beach, and I’ll bet Luca will look out the window for Emily to come home. And Emily will come home, and they will fight. UUGGHH! They are that family!
Treasure Seeker,
Eve