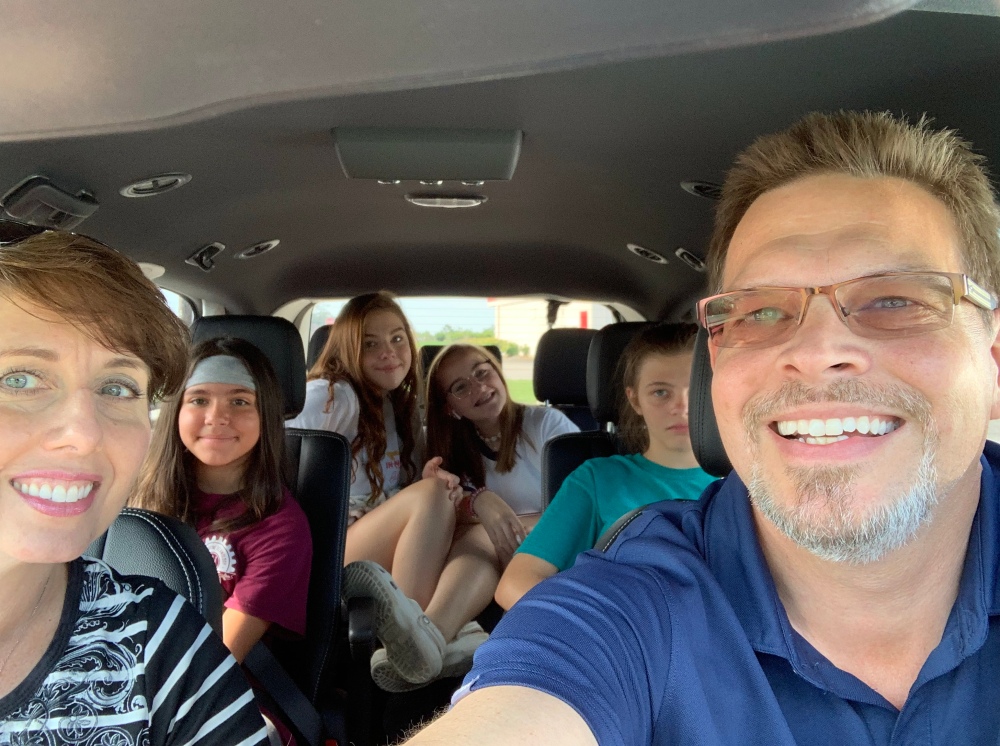 Finally home after Mauk Beach Trip 2019. This one snuck up on me. It seemed like it would never get here, then suddenly I was a day behind in my planning and packing. The girls each brought a friend, and since Grace and her friend Sarah are such animal lovers, we went with a zoological theme for each pair of girls. Grace and Sarah were the Sub-adults, Lauren and Alesia were the Juveniles, and Oh Emily and Victoria were the Hatchlings. Whatever we called them, we all survived each other, and I’m glad I spent the week with my friends.

Paul labors over finding the just-right beach abode for us each year. I’ve never been disappointed in the places he has found for us, save for one dreadful, roach infested hole we suffered through many years ago. This year we stayed at the same resort as last year but in a different house. It was wonderful. We had more room than we needed. We parked both vehicles in the shade right underneath the house so the seats didn’t burn our tushies when we had to drive someplace. We had our own outdoor shower for washing the sand off our feet and legs. Three balconies. Full kitchen. Five bedrooms so each pair had their own room with one room left over (sort of, I’ll explain later). Quick walk to the beach, but I stayed at the water park mostly relaxing in the lazy river or reading under the umbrella. Paul carted all of us around town, here and there, back and forth without too much complaining. There was some complaining, but to be fair, he was and always has been the only guy on these trips. He worked really hard to keep 7 females mostly happy and content and well-fed.

Grace and Sarah, the Sub-adults, drove themselves to the beach. They needed their own wheels so they could run off and do their own thing without leaving the rest of us stranded. They hung out at the Myrtle Beach strip several evenings. I don’t worry about those 2 anymore. Two years ago, they failed to answer my frantic texts when they were at the strip, and this year they were smart enough, and considerate enough not to put me through that again. But late Friday afternoon, I hollered for them in the house and didn’t get a response. I thought it was unusual for them to leave without giving me a heads-up about their plans. Turns out, Grace was sitting on one of the balconies and Sarah had been getting ready in the 5th bathroom that I didn’t even know we had. I didn’t realize how many bathrooms we had until our 7th day there. Unbelievable! So off they went to the Strip to see and be seen. But the Sub-adults actually like Paul and me enough to still go on vacay with us and to sit around a dinner table with our crew. They sat with us under the umbrella and floated in the lazy river with me, and I never once saw them roll their eyes.

Speaking of eye rolls, it’s fun to watch the Juveniles at the beach. They are cocky enough to think Myrtle Beach is their oyster, but smart enough to know that my the Find My iPhone app lets me know if they are too far from the house to be able to make it home before their 10:30 curfew. Lauren and Alesia made curfew each night and didn’t even argue or push my boundaries. They floated in the lazy river with me a little, but I think a few times they also purposely floated too quickly or too slowly so we wouldn’t be floating together. Paul decided Friday evening go fill up the car with gas so we wouldn’t get jammed up at the gas station after check out Saturday morning. The Juvies wanted to go with him. I told Paul that means they want something. They don’t just want to ride along to the gas station. Before he left, I asked him if he had everything he needed? Car keys? Yes. License? Yes. Money? Yes. Dignity? No. It’s alright, Lauren and Alesia would make sure he didn’t need it. They just needed a ride to the ice cream parlor, and someone to pay for their ice cream.

Then we have the Hatchlings. They overslept each morning because they were up late every night. They spent most of their time jumping in and out of the pools and splashing in the waves and collecting shells. When I was finally ready to wind down and think about going to bed, they started to wind back up again. I don’t know where they got their 2nd wind every single night. Wednesday evening I had to tell them “you’re making me crazy!” Even at home Emily all by herself sounds like a herd of wild horses running down the stairs. But here at the beach with her partner in crime Victoria, this tall house on stilts rattled and swayed with their dancing and bouncing. They had too much energy for just one shared bedroom, so they darted back and forth across the hall between their room and the extra bedroom. Their clothes and jewelry and towels and makeup and accoutrements were strewn between the bedrooms and their own bathroom. And yet for some reason, I couldn’t get into my bathroom because Emily had taken over that space as well. The 2 littlest bodies took up the most space.

We ate at all our usual places and added a few new ones. Joe’s, Margaritaville, Blake’s, Duck Donuts, The Bowery, Ocean Front Bar and Grill, Señor Frogs, Hot Stacks, and River City. We put away a ton of food (and still had some of Paul’s chocolate chip pancakes left over in the refrigerator). But despite our best efforts, no one finished their entire meal at River City. Regretfully the titles Burger Master and Master of the Moo are officially being retired because no one deserved those honors this year. It’s our tradition to eat breakfast at the same place each year as we leave Myrtle Beach. Emily and Alesia ordered the same pancake meal, but their method of attack couldn’t have been more different. Alesia was so particular in the way she cut her pancakes, while Oh Emily wielded her fork and knife like a serial killer with a personal vendetta against Mrs. Butterworth. And I’m not one to complain about service, but I think our waitress hated us.

Speaking of food and Señor Frogs, we walked past the dance floor on our way to our table, and Paul and I both thought of the friend Grace brought to the beach many years ago. Back then she lined danced while I ate my nachos, and she’s still line dancing in my mind. I texted her before we ordered our food to say I was thinking about her. I miss all our bonus girls who have come with us. I would hug each of them if I saw them out and about back home. Well, I’m not really sure exactly where I stand with the undefeated BurgerMaster/Master of the Moo from the past 2 years. She doesn’t come around anymore, but if you see her, tell her Momma S misses her dearly.

I considered making a playlist of obnoxious songs to annoy the Juvies and Hatchlings during the long drive to and from the beach. Friends gave me some great suggestions, with Disco Duck right at the top of the list. I never made that play list, but I realized even non-annoying songs can annoy if parents are willing to put in a little effort. Paul is a master at annoying. The trick is to play a song they all like. Let them enjoy their hot jam without singing along. For the next song, sing in falsetto at inappropriate times. Next sneak in a song they aren’t mature enough (translation: old enough) to appreciate. Then circle back around to a genre they like, but ruin it for them with air guitar and air drums and head banging. “Lately, I’ve been feelin’ so cool, Top to the bottom, just cool, Every little thing that I do, Dammit, I feel so cool! Dad can you turn it up. I can’t hear it back here. Wastin’ away again in Margaritaville, Searchin’ for my lost shaker of salt, Some people claim that there’s a woman to blame, Now I think hell it could be my fault. Dad can you please stop singing? Where are my ear buds? Well, it’s a marvelous night for a moondance, With the stars up above in your eyes. Like…seriously…stop…seriously. Can you play something we like? ‘Cause I’ve got friends in low places, Where the whiskey drowns and the beer chases my blues away, And I’ll be okay, I’m not big on social graces, Think I’ll slip on down to the oasis, Oh, I’ve got friends in low places!” Are we almost home?