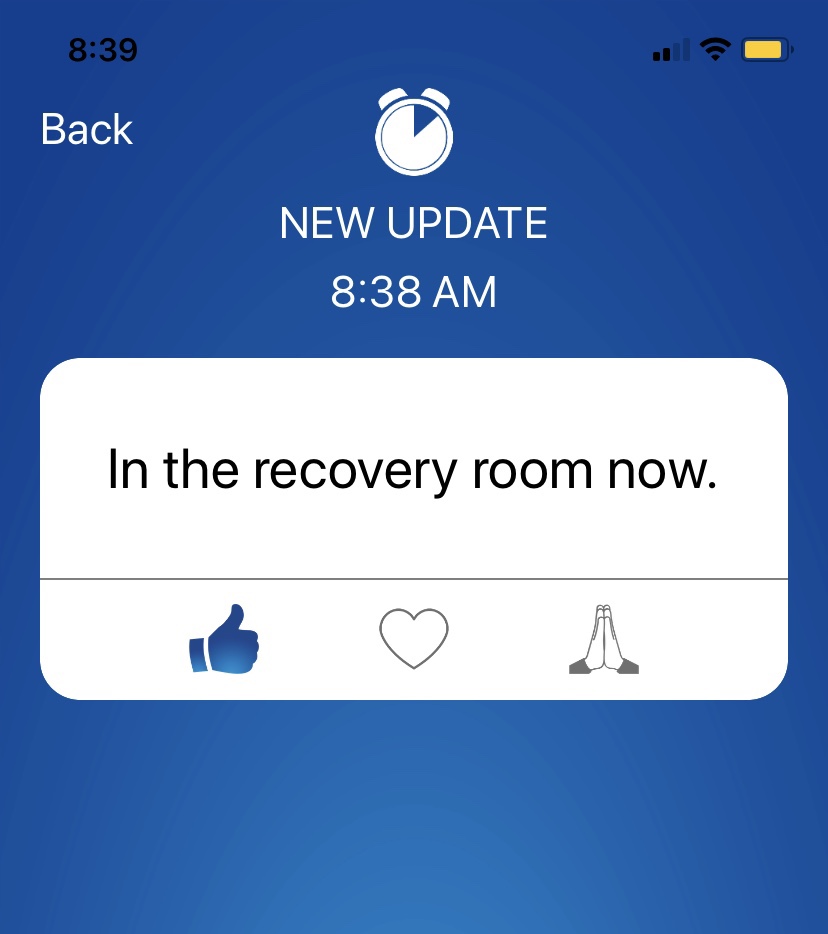 She’s a tough broad. Wasn’t always, though. Back in the day, a hangnail would get the best of her. No one did misery and melancholy like My Lovely. She’s currently the least pediatric surgical patient here at the pediatric surgical center at Baptist. The nurse brought back an infant and a toddler at the same time as Lauren. She’s a little put off by the fact that the nurse asked the toddler what kind of juice he wants waiting for him post surgery, but they haven’t asked Lauren yet.

This is her third wrist surgery in 17 months. It started with a radius fracture playing in the snow January 2017. The break was set with a crooked bend, and that has led to pain, dislocation, and poor function. First surgery was a year and a half after the break to cut the bone and reposition it with a metal plate. Next surgery was a repair and to remove the plate. Since she is still having dislocation and pain, today’s surgery will change the way her tendon attaches to the bone and tighten up the wrist joint.

When this surgery became a reality, she took it in stride. She knows how painful it will be. She’s used to life with a cast at this point. She hasn’t complained. This is a bit more serious than a hangnail, but she’s handling it like a boss. Life has changed her. Growing up has changed her. Softball has changed her.

She was basically told a few weeks ago that softball is over for her. Don’t ever swing a bat and don’t ever catch a ball. Her long-suffering surgeon has joked with her since the first surgery that she should give up softball. He suggested she start rowing, or crew, because it would be kinder to her wrist than softball. Lauren’s not an athlete with lots of interest in sports in general. She’s a softballer in particular. She’s a catcher to be more specific, and her left wrist needs to function properly to catch those strikes. She’s a good catcher, and as tall as she is, she’s got an impressive wingspan, and the ball doesn’t get past her very often. If this is the end of softball, then that’s what we’ve got to deal with. But regardless, she needs her wrist to function properly without pain just to live life.

She doesn’t know this, but I had a few good cries already over this surgery. I’m not worried about the surgery itself. I just hate that she is still in pain and that she’s going to hurt like hell again after surgery. A year ago when she was bullied out of her school, she asked me why I don’t cry over her anymore. She actually thought my tears for her had dried up. I can give her the names of 3 ladies who were in the receiving end of my tears a few weeks ago.

Paul’s mom is in Hospice right now, and Lauren is having surgery, and this is not the joyous way we’d like to spend Christmas. We are ready for Christmas and nothing else needs to be done. I’ll be cooking and baking today while Lauren sleeps. But everything feels heavy today.

The hymn “It Is Well” has always been my Lauren song. She was in a different hospital for 10 days as a preemie. She was here in this hospital for 8 days at 3 years old after accident and cranial surgery. She was at the Davie hospital for her other 2 wrist surgeries. And now she’s back at Baptist today. I’ve reminded myself over and over that with Lauren, there will be sorrows rolling like sea billows. There’s more to Lauren than that, though. Her eyes still squint up when she smiles. She has a fantastic laugh. She’s always first to say “thank you,” and she doesn’t go long without apologizing when she needs to. She’s a joy and a blessing. But nobody does misery and melancholy like My Lovely. And I’ve learned that with the ups come the downs, God is providential and loving through it all, and it all can be well with my soul.

Lauren has never liked “It Is Well” because it seems so negative. But the lesson is that joy and satisfaction doesn’t come from the road being straight and easy and smooth. It is well because God is in control and He is good all the time even when the road bends and blocks my view, and when it’s hard to navigate, and when it’s so bumpy it’s beating me up.

Driving home from Target the other night after buying her a tank top to wear post-surgery, we were listening to the hot jam and it was Momma’s choice. Joe Walsh was singing “Life’s Been Good,” and I was trying to hold back a tear because it just hasn’t felt like life has been good to Lauren for a long time. She asked if we could stop to get some take out, and I don’t know if she saw tears in my eyes. She didn’t say anything if she did see. I’ve been trying to remind myself that life really is good and it is well with my soul.

I learned the Stratford Road Krispy Kreme drive through is open 24-7, so we stopped there at 5:30 this morning. We bought 2 dozen glazed donuts for the surgical team. We brought a gift basket for the surgeon from our family. He doesn’t do Monday surgeries, but he agreed to do Lauren’s surgery today. And Lauren gift wrapped a softball (wrapping a sphere is not easy) and gave it to the surgeon before anesthesia. She wrote “Dr. Li thank you for everything. Merry Christmas. From Lauren Mauk.” That softball is one she has both hit and caught before. It’s been beaten up pretty badly. I think that softball knows a thing or two about misery and melancholy. But that ball holds the history and gratitude of a 15 year old softballer who is learning that despite being beaten up, life’s been good and it is well.

Lucky I’m sane after all I’ve been through
Everybody say I’m cool, he’s cool
I can’t complain but sometimes I still do
Life’s been good to me so far (Joe Walsh)