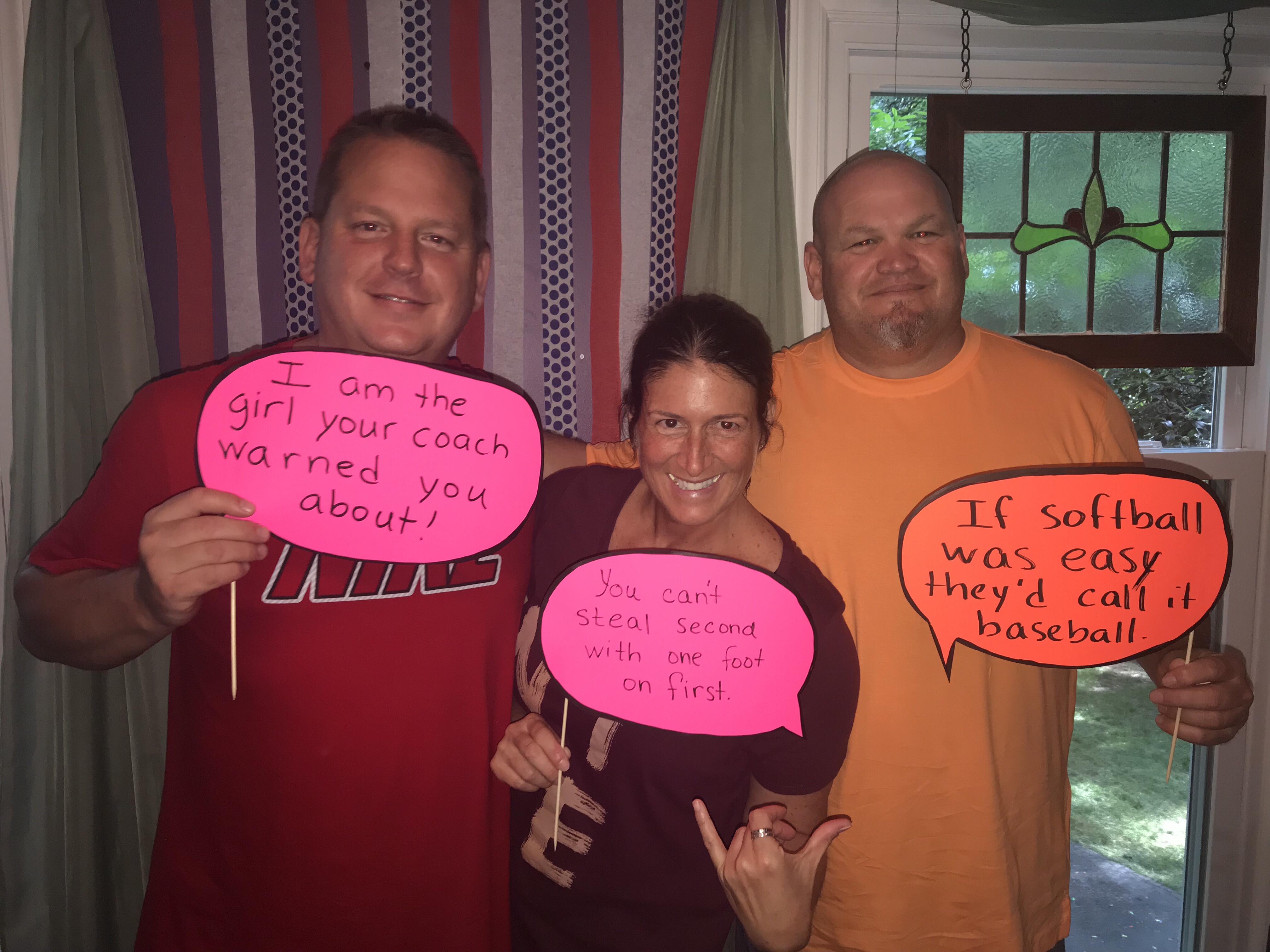 Yesterday was the annual softball party. This is Lauren’s first season with the Carolina Galaxy team, and she is learning so much. Her skills are growing and she is making great friends. Paul and I worked hard Saturday getting ready for the party, with the help of some friends here and there.  And Sunday afternoon by the time the players started arriving, we were already worn out. It was a long weekend, but it was important for the girls to have a day of just hanging out being friends off the field.

I don’t know how guy parties go, but with teen girls, we can usually expect some drama. Somebody’s feelings will get hurt or little cliques will form.  We can’t expect everyone to be BFF all the time, but we have to be mindful of the way the girls interact.  Twelve players came to the party; only 2 girls weren’t able to make it.  Various parents came to hang out and left through the day.  Emily had a friend over and some of the players’ siblings were here. Grace and Chandler showed up after work.  So overall, we had a great turnout, and I think the only drama was Emily being upset that someone got the hamster out of her room without asking.  I’ll blame that on Lauren, but Emily also got Grace’s snake out without permission.

For Paul and me, these parties are about more than just having a good time.  It was a lot of hard work, and I could have easily found some more relaxing ways to spend the weekend. Poor Paul has torn his hamstring twice this season playing on his church softball league, and he did it again yesterday running around throwing water balloons.  We are getting kinda too old for these parties, but we will keep doing them as long as the players show up.

At the beginning of the season, Lauren told me she ABSOLUTELY did not want to have a party. It’s too childish and corny. Lauren is a Middle Schooler but some of her teammates are in high school and you don’t want to look foolish in front of High Schoolers. I asked her a few times about having a party and her refusals softened each time.  I know Lauren pretty well, and when she softens, that means she wants a party.

Paul and I have had dozens of girls come and go at these softball parties.  What I remember most from these parties isn’t the mess and crumbs and empty soda cans and mud on the floor and nearly 2000 broken water balloons on the driveway (new record this year!) or the extensive prep-time or clean-up.  I remember McKenna marching down our street shouting softball chants at the top of her lungs and all the other players chanting along. “I’M FIRED UP! YOU FIRED UP? YA! I CAN’T HEAR YOU!” I remember Sophia and her little sister Alex getting tangled-up playing Twister.  I remember Coach Ashley getting ambushed by Emily’s team, and then covering Ashley’s face with face paint.  I remember when neighborhood boys showed up and challenged the softballers with super soakers, and I remember the boys ran away. I remember Grace thinking she could spray Coach Mark with the water hose without any consequences, and I remember Grace realizing she underestimated Mark’s vengeful streak.  I remember the tire swing breaking 5 minutes after the party started last year, and the hammock breaking 5 minutes later. I remember Kylee spending most of the day with us Saturday helping us get ready. I remember limbo and hoola hoops and bubble wands and a photo booth and loud music (some neighbors might say too loud) and spinning girls in the tree swing and colored hairspray and a dance party in the hall bathroom. I remember Lauren dropping her shoulder and making a bad swing in the batting net in the yard, and Coach Stephanie telling her “fix it!”  I remember parents sitting on the deck watching all of this unfold around us.  My memory is long but the memories blend together and it’s hard to tell one party from the next, and maybe it was all just one big giant, never ending softball party. And I remember every single year right before the party starts, I start thinking nobody is gonna have fun and I don’t know why we are doing this party.

Some of these girls might not even play next season. Or they might play again, but maybe not for the Carolina Galaxy.  Some might want to go as far as college ball.  Some won’t make it, but some might. Some will get distracted and find other ways to spend their weekends. Some will quit because of injuries. Some will move away.  Some will end up doing things they shouldn’t be doing. But it doesn’t matter if the very last time they ever swing a bat is on a dusty field in Pfafftown or at the college championships on ESPN, there better be something they learned on the field that they can use the next morning when they wake up. You better learn that sometimes your best play is to advance another runner even if you get tagged out at at first.  That’s a life lesson. And you need to know that the humble bunt sometimes can be more appropriate than a stand-up-and-cheer hit to the outfield.  And you have to SLIDE! You’re gonna get dirty, but at least you’ll be safe. And Catcher, you can’t catch what you can’t see, so you need to rip your face mask off if you’re going to catch that pop-up. And you never know what’s coming your way, so be in your ready position, and every player moves on every play.

So today is the clean-up from the party. I think the girls had fun. I know Paul and I did. I can count it all success because I asked Lauren if she thought it was a good party. “Yeah!” I would say she’s glad she softened. And to all the girls at all the parties through the years, our door is always open. We look forward to seeing you on the field and off.