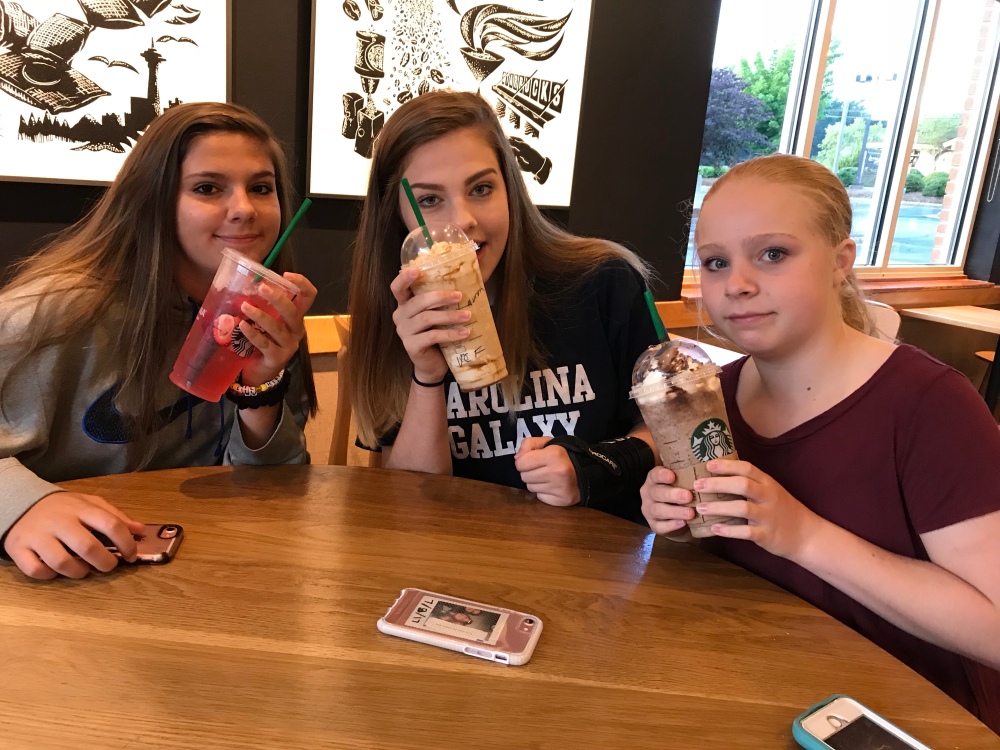 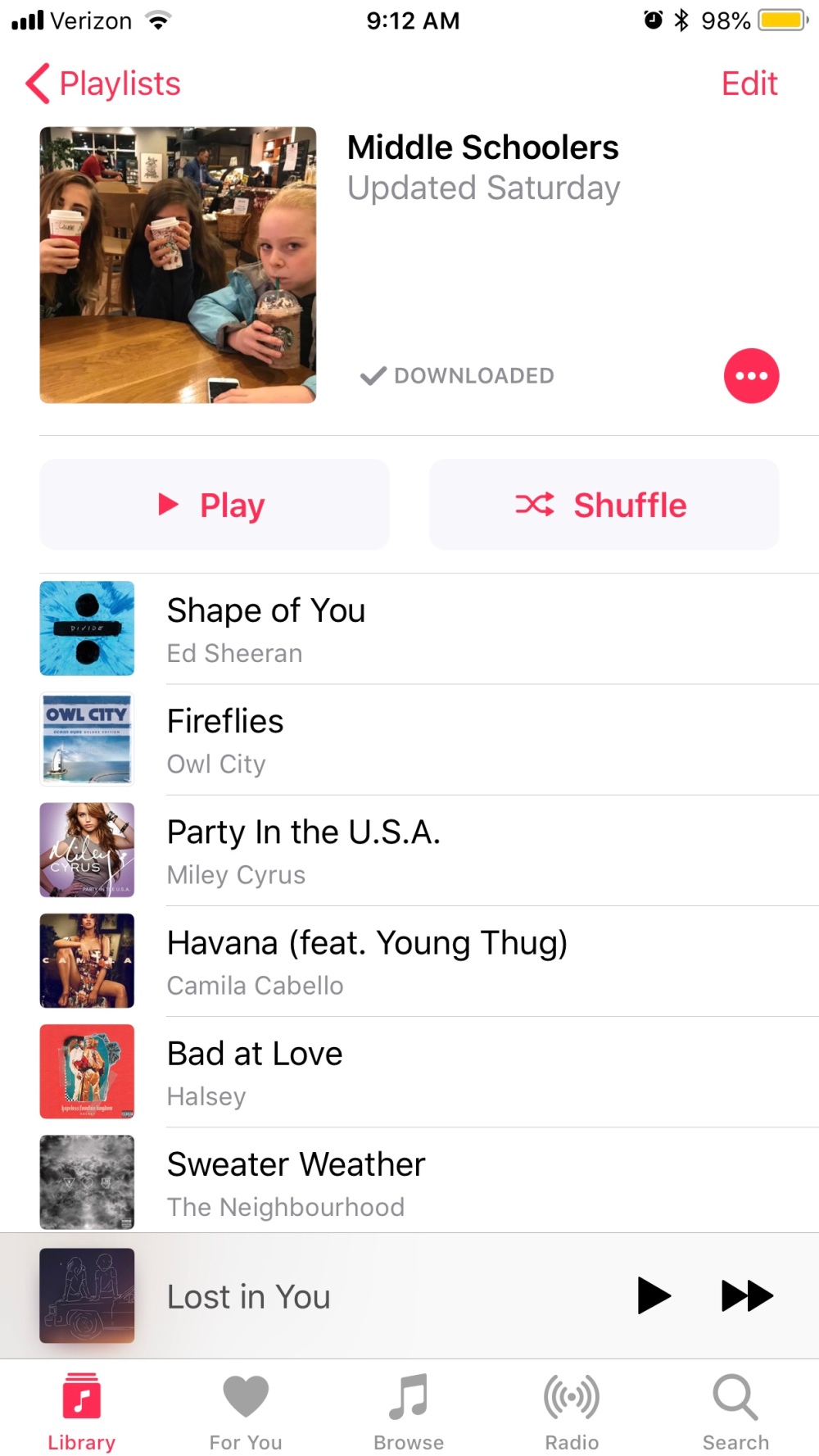 Today was the last ride with the middle Schoolers for 7th grade. I’m not exaggerating when I say that driving them has been the biggest kick in my pants almost every morning. I’ve looked back through the Facebook posts, and seen these 3 girls all over the place in emotions and moods and hormones.

Lauren, Zoey, and Sara are my consistent morning riders. Various other Middle Schoolers ride with us in the afternoons when I pick them up from their after school hang-out. Caroline is the most frequent flyer in the afternoons. We’ve had some TJMS Patriot softballers hitch rides after school softball games and practices. Anaya and Gabby and Caroline have sweatily and stinkily loaded their softball equipment into the Chariot to ride home during the school softball season last fall.

They tell me they love the Chariot. It has been their cone of safety where they know they can say what they want and need. Their secrets stay within the Chariot, and I’m privileged to have been a fly on the wall as they pour out their hearts. Nothing has ever been said that makes me worry about them to the point I’ve needed to break their confidences, but I would in a heartbeat if I needed to. The Chariot gives them confidence to holler at the cute boys riding in the back of a truck, and to sing obnoxiously as if no one can hear them, and to dance as though people in other cars can’t see their dances (but I know they are dancing BECAUSE they know others can see them).

I thought I would just be the driver for these girls. I didn’t expect to be a sounding board when they needed to vent, or a sage dispensing wisdom when they faced relationship problems with friends. I’ve corrected their language (we do not say “hold your tits,” except I guess now we do). I’ve listened to the boyfriend issues. I’ve treated them to Starbucks, vetoed hot jam, chuckled under my breath, laughed out loud, sat in awkward silence, spoken just to fill the awkward silence, and wished I had just kept my mouth shut. The Middle Schoolers have included me, ignored me, serenaded me, embarrassed me, exasperated me, energized me, praised me, insulted me, rolled their eyes at me, confused me, and let me into their world. They talk about me behind my back. I can’t tell you what they say about me because they speak with their thumbs and iPhone keyboards. Zoey has burped in my ear. Lauren calls me Mom! Mother! And Birth Giver! And the other girls refer to me as Lauren’s mom, Mrs. Mauk, Mrs. Sandie, Momma S, and Hey. And I’ve learned the subtle difference between being called “so extra” and “too extra.” One compliments me while the other means I’m obnoxious. I can own both, and I rock both.

Middle Schoolers have their own dialect sometimes. You have to hear it in person and I can’t give it justice by writing it. Trust me, it’s weird. And just this year, Lauren changed her name to Lauryn for awhile, then changed back to Lauren. Whatever. And one morning Sara became Sarii. It’s still pronounced Sara; the “ii” is silent, and there’s an invisible “a” at the end. So there’s that. Zoey has always been Zoey, and she confirmed that this morning to the Starbucks barista “Zoey with a y.” Their favorite sayings are somewhat predictable. Ah geez! Can we drive around? Eh Mauh! MOTHER NO! Like and totally (they say “like” and “totally” more than the Kardashians). Ok bye-ee!

Shotgun seems to be the favored position. That’s Lauren’s seat in the mornings, but in the afternoons, it’s open to whomever runs the fastest or pushes the others out of the way. Shotgun plugs into the Chariot stereo and Shotgun controls the hot jam.

I love these Middle Schoolers so much that I put together a play list for them just for the last day of school. I tried to find the songs that they played over and over and over ad nauseum and over again. My best guess is that I totally mischose all these songs because I’m old and out of touch. Just because Lauren plays Sweater Weather every single morning doesn’t mean she’ll like it today. But on Saturday, I tried it out on Paul and Emily. Exactly the response I expected. Emily was not a fan of Paul’s singing. “You sound like a dying walrus!”

I’ve learned to play my cards close to my chest when it comes to the hot jam. If they know I can’t stand a song or a singer, that’s what they’ll play. So if I hold my tongue through some of the hot jam, I find that my least favorite songs will eventually fall off their play lists. I didn’t learn that quickly enough, though, so I do have a No-Play policy. But for the last day of school…uugghh…I am breaking my policy and allowing Fireflies by Owl City and one, just one, solo, uno Ed Sheeren song…sigh. Do not Ed-Sheeren-shame me. He’s very talented, but I. Just. Cannot.

Sometimes they sit still and silent during the hot jam in the mornings. Sometimes Monday mornings last for more than just one day. Friday’s are a toss up; they might be pumped since it’s their last day of the week or they might be slap wore out by the time Friday gets here. But the shoulder shimmy can show up anytime. Hair flips are ubiquitous and a favorite among most Middle Schoolers. There can be some head banging. They sometimes hang out the windows. They have hand gestures and jazz hands and the thumbs up. And because Middle Schoolers love their own faces, they are always snapping selfies. Selfies are a constant because the light changes on their faces depending on which direction we are traveling, and it would be a shame to miss perfect natural lighting. I’m not kidding. But for some reason, if I turn my camera on them, they hide their faces. But as soon as I lower my camera, I hear “aren’t you gonna take my picture?” So I take their pic and usually Lauren will be hiding half of face with a thumbs up.

So when I picked up Sara and Zoey with a y, I announced that I was choosing the hot jam for today. Lauren was not pleased. “MOTHER NO! No one wants to hear your music!” I guess she was worried I’d play my Barbara Streisand or Andy Gibb. I had 14 songs which is way too much for the ride to school. Sara’s eyes showed how shocked she was when I played that dreaded 10,000 fireflies song, and they mumbled along under their breath to Shape of You on the way to Starbucks. My treat. I let Lauren choose what to listen to during the last mile to drop-off. Taylor Swift for just a minute, and then Lost in You by Khai Dreams was the very last song they heard as they piled out of the Chariot. It’s by far the most chill, smooth, relaxed song they have played all year. And I think it sums up how I no feel about those Middle Schoolers. I think I might need to get them together once a week during break because I can’t wait for 8th grade. I love you Middle Schoolers! Enjoy your summer!

Khai Dreams Lost in You

I’m not tryna complicate none of this

none of this so

lemme just come tell you how I feel

I’m just looking for some balance and some trust

but all i get is unrequited

why my world always on fire never chilly

but i guess that’s what we always said

yeah i guess that’s what we always said

And we can get lost in an off beat rhythm

And i think that i will till the sun come up

When the sun goes down we gon’ get in touch

Cuz I don’t even know

i don’t know why

All your love I’m tryna find

I’m so lost in you

And all that you do