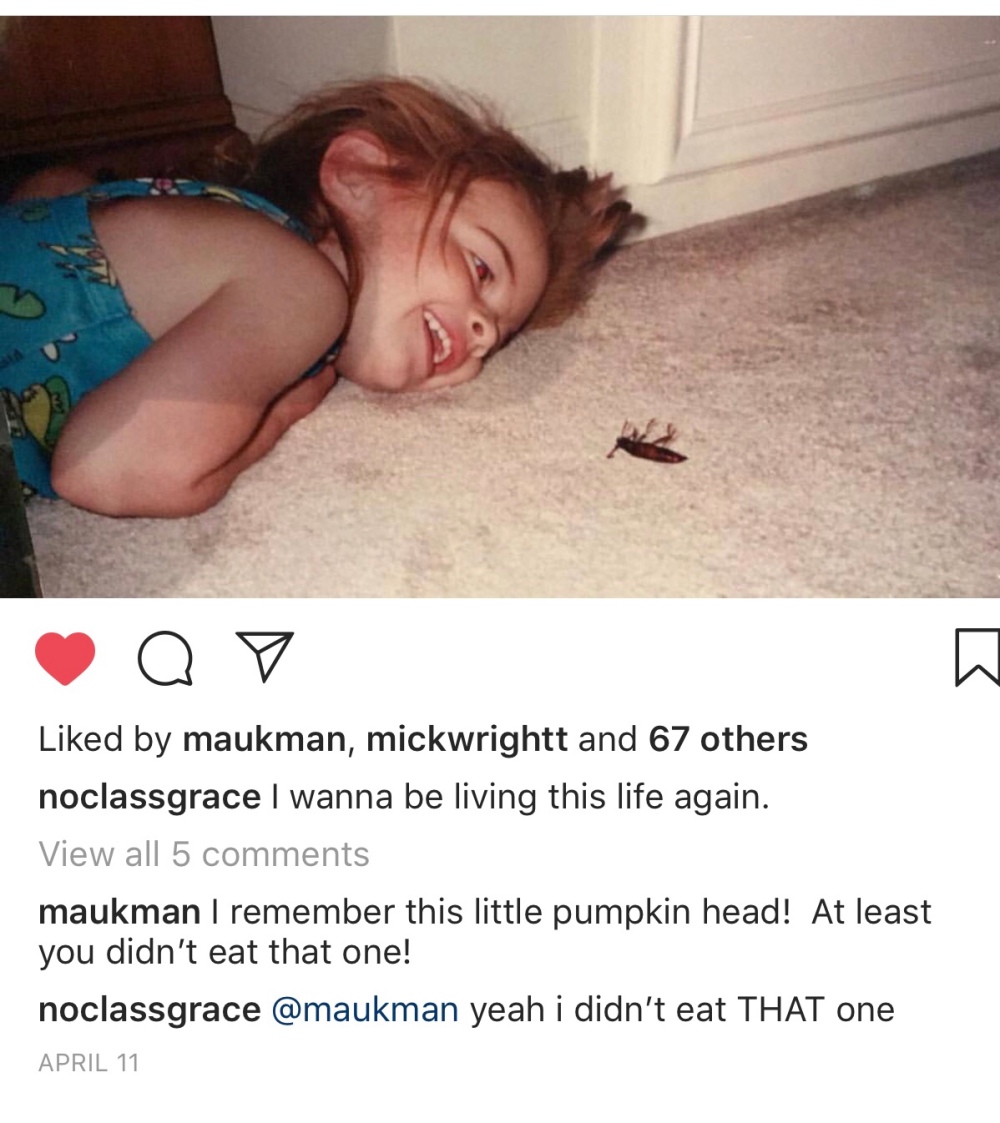 Here’s a story about you…

When My Gorgeous was maybe 2 years old, I found her staring at a parade of ants marching across the kitchen floor. She couldn’t take her eyes off of them. At 3 years old at the beach, I watched her grab a fly from the air in mid flight. Pretty neat, but I thought there was no way she could do it again. But she did. When she was 5, I told her the exterminator was coming to our house, and she asked what an exterminator was. I told her that he was the guy who would kill our bugs. She was mortified and asked why would anyone want to kill bugs. At 14, she reached down into the ivy and pulled out a black snake. It coiled around her arm as she walked out to the cul-de-sac, and the neighborhood boys stopped their basketball game to stare at this fearless chic.

I have exciting news. Grace has made a life change by leaving the Wig and Makeup program at University of North Carolina School of the Arts. She will begin the zoology program at Davidson Community College in October. There’s no telling what she will do when she finishes the program, but it will be the fulfillment of a lifetime of passion for a fearless chic.

I know what you’re thinking. What about the wigs? It was such a passion. It seemed like such a perfect fit. God carved out such a perfect path for her at UNCSA. You’re right about all of that. Grace’s struggle with depression, cutting, trichotillomania, and her suicide attempt all culminated in the most amazing chain of events that could only have been orchestrated by God. It will always be my strong belief that God put people in position of influence to speak up and into Grace’s life at a critical time when what she needed most was to feel a purpose for her life. UNCSA Wig and Makeup hand built a custom wig for Grace to cover her bald head, and that sparked a mentorship with Christal Schanes from W&M. Grace applied to the department and was accepted into the program as a student. She learned how to make the same kind of medical wigs that students had made for her. She had an incredible year at UNCSA. But as we all do, or hopefully do, Grace grew and matured and learned things about herself as she healed physically, mentally, and emotionally. As incredible as it was to feel like she could give back by making medical wigs, she realized that spending 4 years in a program designed to train people to make wigs for the entertainment industry was not what Grace wanted to do.

Grace started volunteering at the reptile rescue in Kernersville. This has rekindled her passion for animals. No, I take that back. Her passion for animals didn’t need rekindled; it has always burned in her heart. But during such a long, lonely, dark depression and struggle, she focused on destroying herself one cut at a time, one patch of hair at a time, and one handful of pills at a time. If a parade of ants could have pulled her out of that darkness, by God, her dad and I would have marched them through Pfafftown and given her a front row seat.

Grace told us she was thinking about changing her career path months ago, but she hadn’t decided for sure. It was a hard for Grace to tell us, and it was hard for us to hear. She spent some time thinking and praying about her future, and then she told us her decision. I know so many of you celebrated with us when Grace was accepted into W&M at UNCSA. For Paul and me, we saw UNCSA as such a divine purpose and direction for Grace. We had watched Grace’s pain up front and in person. Well, as much as we could. Grace doesn’t purpose to show anyone her pain. She hides it in her secret places, but we saw the pain and struggle more than anyone else. And if you think it looked horrifying from where you were, you can’t imagine what it looked like from our seats. After her attempt and 9 days in the psych ward, we welcomed the incredible blessing that unfolded with UNCSA. And then hearing that Grace was walking away from that left Paul and me shocked and disappointed that she was throwing away such a gift. Yes. I was disappointed in Grace. Maybe good parents are never disappointed in their kids. But honestly Grace has left me with all the feels, even the bad ones. And Grace was worried y’all would be disappointed in her. She knows you prayed for her. She knows you cried. She knows you celebrated and wished her well. You volunteered to be wig models for her, and you looked forward to hearing what was next for her.

But I’ve had time to think about it all. Grace’s journey through life isn’t mine to chart or navigate. Her dad and I raised her to make her own choices and to live with her own consequences. Some of her choices and consequences have really sucked. But she has also made beautiful decisions. We have watched her flourish and grow into an amazing young woman who played with death, and now knows much more than she should about life. I thought designing wigs for television or broadway sounded like a fascinating way for my daughter to live, and it would have been. But that’s not my girl. She has always been my bug girl, my nature girl, my animal lover. Didn’t I say that I always imagined Grace’s office would be a safari?

She has her critters. She’s always had critters, and she always will. She loves her ball python, Millie, and I don’t mind holding her. And her tegu, Kaa, with the nasty disposition and bitchy attitude isn’t really a favorite of mine, but Grace loves her. She needs her animals.

I have seen Grace with porcelain skin and with cutting scars. I’ve loved Grace with her own long, natural hair, and with extensions, wigs, bald, head scarves, and now rocking a curly henna-colored pixie of her own new growth. I’ve watched the morning sun shine on her beautiful smiling face, and I rode with her in the ambulance to Brenners on the darkest night I’ve ever known.

I couldn’t be more proud of My Gorgeous and her decision to take charge of her future. I was disappointed. I can’t be more honest than that. But I got over that mess. I had to go back to what I’ve always known is true about Grace Madison. Grace is the undeserved favor of God. And Madison is the beautiful gift from Jehovah. I can’t argue with who she is. And almost 20 years ago, we almost gave her the middle name Siri (thank goodness we didn’t). But it was either Madison or Siri. I think we chose well. Next time you’re chatting with your iPhone, remind her that her name means beautiful victory.

I’ve wanted to write something to explain and honor Grace’s new path. I guess it’s really not new. She has always been on this journey. I was driving home from KFC with Lauren and Tanner today, and I knew God was telling me that today I need to write, and I asked God to tell me what to call this message. Right at that second, Amazing Grace came on the radio. God always does that to me. He pierced my heart with that song for Grace years ago, and He got me again today. “Mom are you crying? Don’t cry, Mom.” Lauren doesn’t understand that tears aren’t always sad. Sometimes my tears are just an agreement with God that yes, I do understand just how amazing His grace is. And my tears are my way of telling My Gorgeous that you are Amazing Grace.