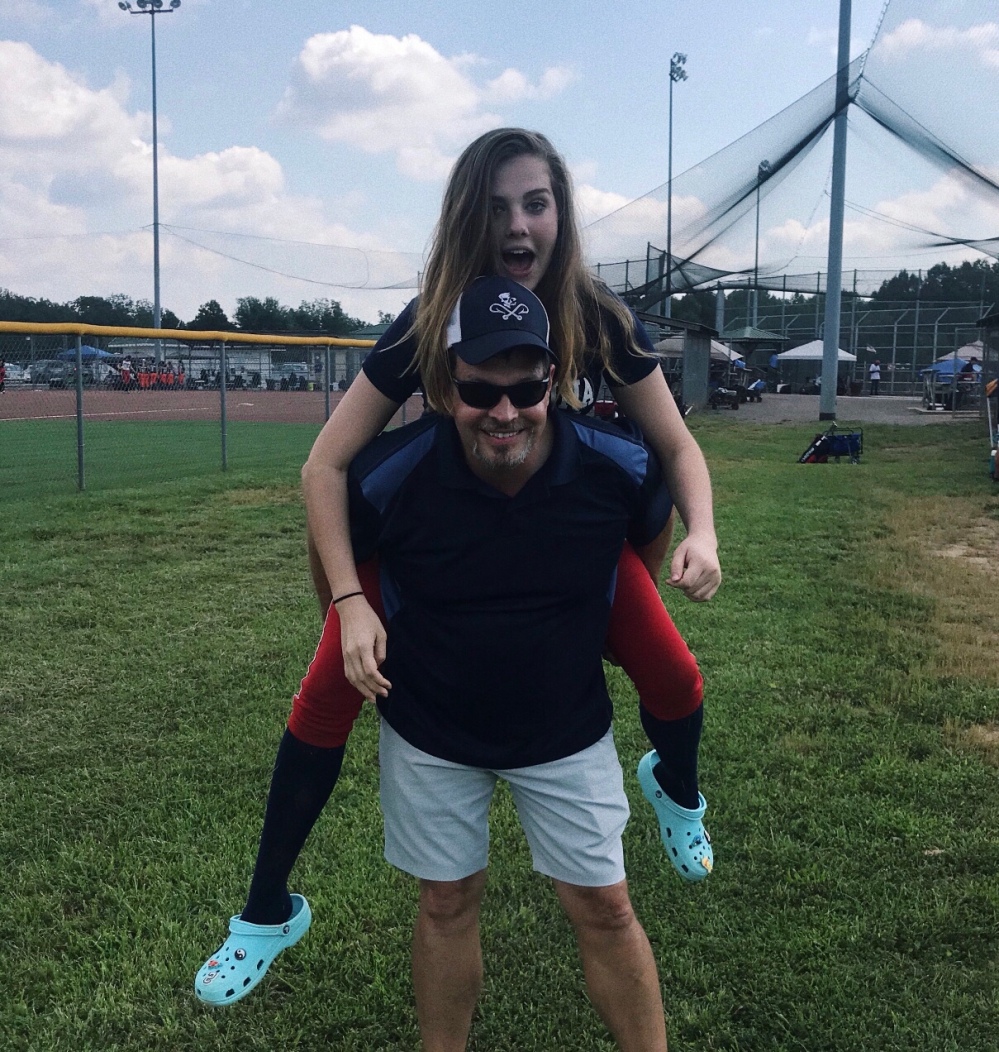 Lauren hasn’t played a softball game since June when her doctor told her she would need wrist surgery. She originally injured her wrist by slipping on the ice January 2017. The broken bone didn’t heal well, but we didn’t know that at the time. She had that cast removed and she was cleared to play ball the day of spring Little League evaluations in 2017. She couldn’t wait to get back out on the field. She played but she mentioned that sometimes her wrist joint would pop. Over time, it happened more and more often, and started causing pain. Fast forward a year, and she was in serious pain more often than not. She’s a catcher, and her left wrist wasn’t working for her. In the last game she played, she struggled through the pain as much as she could, then a pitch hit her on the left wrist. Of course!

Her doctor referred her to a surgeon who said the after the original injury, the broken radius bone had healed with a curve, and the curved bone was pushing the ulna out of place when Lauren would rotate her wrist. The only way to fix it was to cut the radius and realign the bone properly with a metal plate, and repair the damaged ligaments. Surgery was scheduled July 3. She was in a soft cast to allow swelling up past her elbow, and she was hurting pretty bad for days. You don’t mess around with hydrocodone, but she took that for several days and still hurt anyway. Her hard cast stopped before her elbow and gave her more range of motion than the soft one, and she lived with that until August 20.

After surgery, with the cast, she went to the practices for her travel ball team. She just did what she could, which wasn’t much, but she was there. She went to the tournaments and cheered her team, but she wanted to play.

You have to remember that Lauren’s first season of ball in 3rd grade only happened because her friends wanted her to play. “Come on Lauren, come play!” She had never been on a field or seen a game. She didn’t have a clue what she was doing, she didn’t know when to run, where to throw, and she didn’t try very hard. But it didn’t matter; she watched what everybody else was doing and listened to Coach Van. I’ve always said that when Lauren started playing softball, she swung the bat like she was afraid of hurting the ball’s feelings. She had no confidence, but she was paying attention. Her second season, she hit a home run, and Leila’s mom asked me “what got into Lauren?!”

Watching from the dugout was hard for her. She watched Kylee and Malena behind the plate, and they both rock as catchers. And you can tell they enjoy it. But it’s hard to be on a team and not participate.

Finally her cast came off August 20, and she started physical therapy. She kept up with her exercises and wanted to try out for the school team. The school coach from last year has stepped down, and the new coach had never seen Lauren play ball. She didn’t know if Lauren was any good or not. Lauren couldn’t officially try out since her doctor had not cleared her to play. The school coach and athletic director were gracious to put her on the team despite not seeing what she could do. Lauren was cleared to play after she made the school team. She would have only a few days to practice before the first school game. No pressure.

I went to the school practice one afternoon. It was the first time I’d seen her catch a ball or hold a bat since June. She had spent a couple travel ball practices catching and throwing, but I hadn’t seen that. So at school practice, I sat under the big tree and watched nervously. Coach was running some drills, and Lauren was catching the balls as the fielders threw them in. Not hard pitches, just tosses. But she was catching a ball! Then they paired up to practice bunts. It really wasn’t a big deal to hit the bunt, but since this momma hadn’t seen her hit anything in forever, when Lauren bunted the ball, I almost jumped up and shouted “You Make That Bunt Your Bitch!” I didn’t do it. I stopped myself. I can only imagine how embarrassed Lauren would have been if Coach H had to say to the players “please tell your parents not to curse. I’m looking at you, Mauk!”

So she had a couple of school practices, and a couple more travel practices. On Saturday she played the travel tournament in Eden. Emily was cheering a football game, so we missed the first 2 games of the tourney, but Paul was there. She batted in those games, but didn’t catch. I got there before the 3rd game and watched My Lovely hit. Malena was catcher until the final inning. The tournament games are only an hour, and time was short. Then Lauren walked up in her catcher’s gear, turned around to look at me and yelled “MOM! I’M CATCHING!” I had my camera ready to go, then umpire called game over before the pitch. Uugghh! That’s ok. Maybe next tournament.

But today was her first school game. Lauren had messaged her school coach to let her know she played in the travel tournament Saturday and she was ready to play for the school game Monday. Paul and I were there in the stands with Zoey, Kylee, Tanner, and his Momma. Lauren played Little League with some of the girls on the other team. They played a great game, and it’s always a pleasure to cheer for girls Lauren used to play with. Gabby pitched the beginning of the game and Caroline the end. Those girls can throw some heat, but Lauren stayed with it and caught the whole game.

She’s coming back y’all. She’s ready to be useful on her teams. She’s not afraid to hit and it doesn’t hurt to catch. I’m so proud of all the hard work she has done to get ready to play. Softball isn’t just a physical game; it’s mental, too. She had lots of reasons to doubt herself. But she has been watching these last few months, and her friends are still saying “come on Lauren, come play!”